Revamped Pathway, New Scenes, and way more Tech for All The Feels

It’s dark early around Duluth’s Lake Superior, and we’re feeling that eerie change in the air. Partly, it’s the sounds of saws and hammers from the S.S. Irvin’s hold …and we can only guess what new horror is being created down there.

The set design crew says that every room (or creepy scene) within the Haunted Ship has been touched in some way. Add to that a pathway change, two major room remodels and some new animated props, the experience is fresh for 2022.

“Every year we make a few bigger investments in things we’ve been eyeing for a while,” says Steve Rankila, Director of the SS. William A Irvin.

Given that the Haunted Ship has been going on for 29 years means there’s quite an arsenal of “toys” to decorate the 700ft ship.

Also changed this year is the walk-through down in the ship’s hull. Parts of the new route have been designed with unexpected turns and pitched angles to keep guests disoriented and off-kilter. Set designer John Carpenter is 6ft. 6 inches and used as a model to decide how small is too small. “I’m the test,” says John, “I fit, but barely.”

This re-routing has longtime crewmember Dan Patterson pleased. He feels the new layout is a better use of space making “for more haunt” with “four or five new cubby spaces for additional tech.” And as he says, tech does a lot to enhance a room.

And all that gear is set designer Addison  Severs’ jam. As a longtime AV club member, recent Disney College grad, and current UMD student, he’s putting all this glorious nerdery to work on the ship. He ensures you don’t just see and hear a thunderstorm, but actually feel it. It’s magic created by various prop controllers, software, and of course, ingenuity.

That ingenuity is what makes the Haunted Ship special. It’s taking something headed to the landfill and upcycling it just the thing to make a scene feel complete. Something creepy wonderful.

Crew members bring these pieces and ideas to be workshopped with the team, including the set builders, Jeff Crowe, Bobby Bluebird, and Nel Stauber. The builders “are the big reason we get most of the work done and deserve a lot of credit,” says Steve.

That means the concept benefits from years of practical experience, ideas gleaned from national haunters conventions, and just way too much Youtube viewing. “We watch hours of it and always send videos back and forth to each other all year,” says Addison.

The goal is to get their boss Steve to like it. “If Steve likes it, it’s good,” says Addison.

Of course, every Haunted Ship needs its ghouls — and that’s a cast made up of primarily volunteer actors. All are graduates of our “Scare School” training, which is helpful for their interactive roles. Their days are long as they come well before opening to sit for a professional make-up session – a process that can include everything from scars to horns.

The results of all these efforts, on actors and the ship, are simply transformational.

The Duluth Haunted Ship starts Oct 6, 2022, and runs Thursdays, Fridays, and Saturdays in October –plus MEA Wednesday the 19th and Halloween Monday the 31st.

Advanced tickets, including Fast Passes, for the Duluth Haunted Ship, are available at DuluthHauntedShip.com.

(You can also read about the paranormal experiences the crew experienced on the William A. Irvin.) 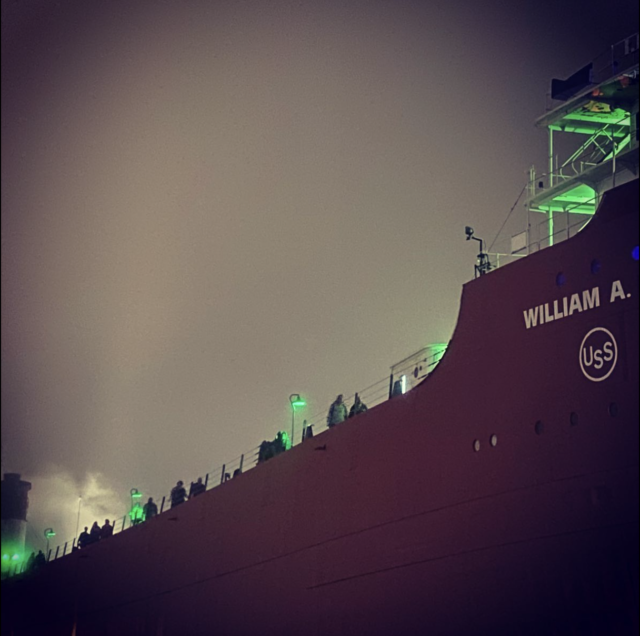