Skip to content
Home : About the DECC : DECC Blog : News : Robots take over the DECC

For weeks my co-workers at the DECC have been buzzing about the upcoming FIRST Robotics event. Clearly, it’s a staff favorite. In previous years, the DECC staff event built their own trophy for the Junk Yard Robot category (not played this year) and Chef Jerry says, “I love this group – they’re good eaters!” (High praise!) And there’s a true giddiness behind their words leading me to nod and say something benign like, “It sounds fun.”

But I had no idea. Because until I saw the thousands of students, hundreds of mentors, the arena filled with nutty fans, and experienced the behind-the-scenes miracles, I couldn’t fathom it. Truly, it was awesome.

In the DECC Arena

I started by popping into the stands and just watching. The lights were dimmed to focus all the attention on the bright court below. Inside were a number of robots, balls, and hoops as the announcer hyped the crowd like it was a wrestling match. As the teams were introduced, the players’ home flags were swung — and the crowd responded loudly. Groups of fans stood and hooted. I say without hyperbole, I got goosebumps.

Big screens enlarged the action on the court as robots worked to complete tasks. I watched high schoolers, literally on the edge of their seats, mumbling under their breath, jump, and fist pump the sky as a ball swirled down a funnel. I felt the energy in my chest.

I slipped downstairs and talked my way into the volunteers-only area. There I met Jerry Krist working the corridors. He was talking into a headset as teams entered the hallway with their wide robot carts, calling ahead to another volunteer to hold oncoming team traffic. “537 outbound to pit with caboose,” he called into his headset. Between calls he said that this Duluth event was one of his favorites.  “It’s well run, the facility is beautiful and because the arena can run two tournaments (double regional) at the same time, it’s one of the biggest in the Midwest.”

As we chatted, teams marched by in colorful matching t-shirts or elaborate costumes with capes and plastic swords or safety helmets topped with illuminated light bulbs. Some students looked like they might get sick; others could have powered the city with their enthusiasm.

Jerry started his team with another parent in Oak Creek, Wisconsin years ago. His own kids have now graduated but he remains involved. “These are the smartest kids I’ve ever met. For the past six years, our team has had either the valedictorian or salutatorian for the entire class.” (Some quick googling showed graduating class sizes of over 500 students.)

He said this year’s contingent was small due to the pandemic. They only brought 17 kids from their school outside of Milwaukee. The cost to the team for this multiday event for hotel, bussing, and entry fee was a cool $15,000. In a more typical year, the club brought 32 students. The numbers are stunning.

“We run our club like a business,” says Kirst, “so the students learn how to fundraise and then give back with service hours to the community.” This includes packing meals for social service agencies and running a robotics club for younger children.

Also in the corridor was volunteer Nicole Schossow. “This is a place that kids can participate in a team sport without necessarily being athletic,” she said.  The event also plans in accommodations to make the event welcoming. “There’s a quiet room, a mother’s room, a prayer space, gender-neutral bathrooms, and if a student has a para professional, we’re ready to work with them to get them into the pits and onto the floor.”

Nicole explained it’s all part of FIRST Robotics’ value of “gracious professionalism” in action. “Inevitably, a rooky team arrives with an incomplete bot. Mentors and kids from other teams will pour into their pit area sharing gear, tools, and advice. By the end of the tournament, that team leaves with a functional, competing robot. It’s amazing to see.”

After being outfitted with a pair of safety glasses, I was allowed into the pits. This area is where teams work on their robots and get to know each other. It also has areas for spare parts and even a machinist shop.

I spoke with volunteer machinist Wayne Landquist for was a longtime volunteer for the Duluth East robotics team. He had brought an impressive number of large tools from his own workshop for volunteers to cut, drill and fuse metal as needed by teams. Wayne knows what he’s doing having worked on  Archer Brothers professional races in the racing pits.

“First is a very good program to get kids into STEM. I saw students end up at NASA. Others out free rides to great schools. And it’s really great for kids who are not sure what they want to do after school. I had a student like that do CAD designs for robotics and go on into CAD for a career,” said Wayne.

I cautiously approached a team pit, built out with metal, lights, and video screens. Students and mentors were gathered around their robot and I didn’t want to disturb them. Behind me, two students appeared. “Hi, would you like a team button?” There is only one answer to that question:  um, yeah!

That was Isabella Bianchini. She’s a rooky Scout/PR member of the Nicolet High School robotics team from Glendale, WI. And she was thrilled to tell me all the things: team’s motto (FEAR: Future Engineers of American Robots), that it’s a no-cut team  (no one is turned away if they can’t pay the team fee because of all their fundraising) and it’s the team 10th anniversary. There’s also a planned “line of succession” on the team involving white papers.

Senior Caitlin Norton joined our conversation saying that she had been “shy in middle school” but made a core group of friends in robotics. She also exercised public speaking skills, pitching to groups for team funs. Her experiences with the team featured heavily in her college applications.

Soon two more students emerged from the pit. These were pit programmers Emma Maertz and Zee Isahaku. Emma shared that when she applied for summer jobs she always found a way to answer interview questions leading with, “Well, on my robotics team…” She smiled in a way that said, “Adults just eat that up.” Certainly, it was working on me. Zee smiled shyly adding that he loved the team. 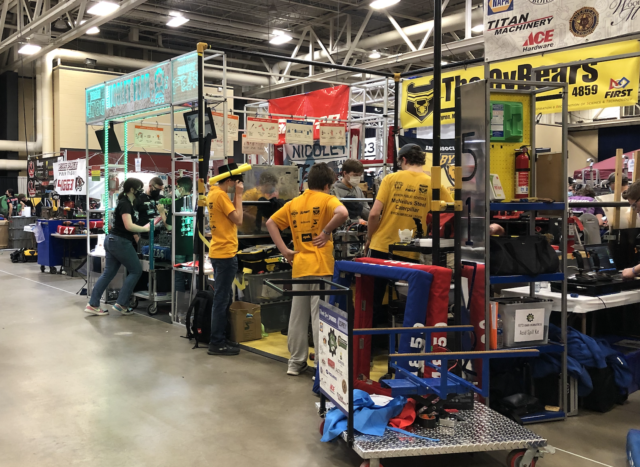 Lucie Amundsen is a writer and the communication director for the Duluth Entertainment Convention Center.

You can reach her at hello@decc.org