This concert was special. Undeniable singing talent, four outfit changes, a full lap around the arena to greet fans, and a twerking drummer all made for an exciting evening. Kelsea Ballerini, Brett Young, and Brandon Ratcliff performed in Amsoil Arena on May 9, 2019.

Kelsea Ballerini was recently inducted into the Grand Ole Opry as its youngest member. Her quick rise in country music popularity filled AMSOIL Arena as her headlining Miss Me More tour neared its end. In fact, the singer shared an emotional post of gratutide to Duluth’s enthusiastic audience on her Instagram account: 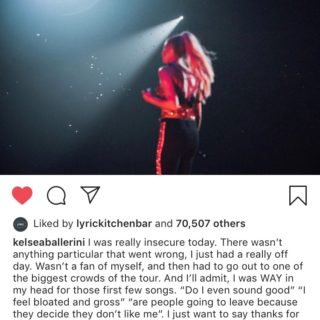 “I was really insecure today. There wasn’t anything particular that went wrong, I just had a really off day. Wasn’t a fan of myself, and then had to go out to one of the biggest crowds of the tour. And I’ll admit, I was WAY in my head for those first few songs. “Do I even sound good” “I feel bloated and gross” “are people going to leave because they decide they don’t like me”. I just want to say thanks for changing that mood for me tonight, Duluth. By the middle of the show the smile was genuine and I was reminded that music and human connection heal insecurity and self doubt. Thanks for throwing lots of love my way tonight. I hope you felt some too. And if you’re feeling the same way, you’re sooooo not alone and you’re sooooo lovely. Ok night night.”

The performance at AMSOIL Arena was emotional, full of talent, and -of course- very fun.

Growing up means never apologizing for who you are, and what you’ve been through. And for Kelsea Ballerini, one of Country’s new voices, growing up also meant having the courage to put it all – the loss, the love and the highs and lows of life – into song. The result? Unapologetically, Ballerini’s sophomore LP, a collection of songs – all which she wrote or co-wrote, as on her Gold-certified debut The First Time – meant to share her experiences over the past two years like a sonic journal, inviting listeners to open the book of her story and listen along.