Origin stories aren’t just for Marvel heroes. Some of the DECC’s most beloved concession foods have their own tales to tell.  Our Porketta Nacho Grande was conceived while DECC concession manager, Dolly, was enjoying a concert. Or trying to – “When I go to shows I can’t help but look how every is done and compare food.”

(Did you know that each concession stand at the AMSOIL arena serves its own specialty foods? Keeping scrolling for the hack guide)

If the Rolling Stones can’t get you out of your head, I’m not sure what can.

To be fair, Dolly was getting exactly what she wanted – NACHOS. When she dug in, she started thinking. How could we do a version of this? So, while she was enjoying this concert experience with her superfan 13-year-old, she was also sizing up her snacking.  “It’s about breaking down the ingredients list and thinking about the DECC could put its signature on it.”

That next week, Dolly brought her dream nacho idea to the table, complete with lots of photos. The crew in the kitchen, including food and beverage manager Amy and Chef Jerry deconstructed and the RE-constructed for a couple of hours.

‘It’s a lot of ‘I don’t like this, add this instead’ type conversation,” says Dolly.

The big takeaways were that while Dolly liked the nachos from the concert, she felt the chips got a bit mushy. They needed more CHIP INTEGRITY  (please read like Scotty from Star Trek)  to stand up to the mountain of toppings they were planning.

After rounds of taste testing, the crew decided the best chips would be to MAKE THEIR OWN. And on top of those house-made chips, they added the DECC’s porketta and created a new menu item – Mexican Street Corn.

“An upside of adding Mexican Street Corn is that it also gave us another vegetarian option,” says Dolly.“ And the cotija cheese and seasonings in it is just fantastic.”

That was partially inspired by feedback the team reads on Facebook. They’ve also read that getting rid of classic nachos was NOT an option. “People are divided on the ‘old school’ super nachos. Some people consider them a staple.” 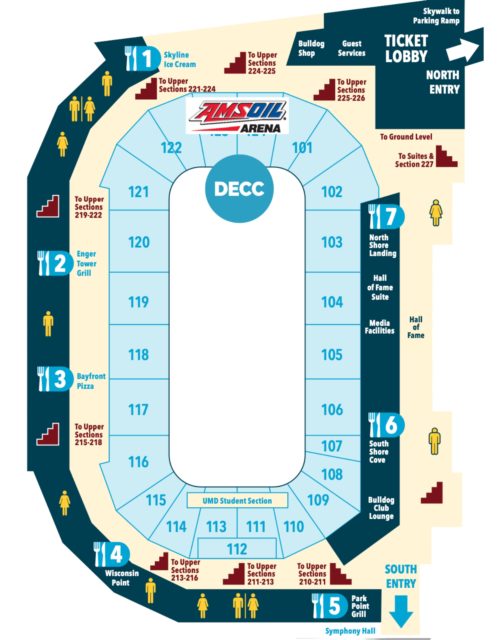